For what it's worth, this blog is now here: http://thethoughtgang.wordpress.com
Posted by The Thought Gang at 10:20 1 comment:

Every once in a while, people accidentally say what they really mean.....

In the comments on his post about Farrer & Co's opinion on the fiduciary duty (or absence thereof) of directors to avoid tax, Richard Murphy is challenged on the distinction between those organisations he criticises  and the Unite union, which pays no tax on investment income... 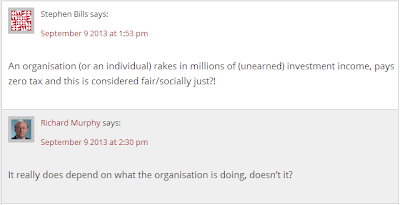 Posted by The Thought Gang at 05:15 No comments:

A thoughtful piece about BBC impartiality by Charles Moore in the Telegraph gives some support to the view that it is the readers of newspapers who drag content along certain paths, and not vice-versa.

The article politely ponders the ideological outlook of the beeb (or, rather, how the writer perceives the majority of those who work there) without sullying itself with particular issues or bête noires.

Venture ye below the line, however, and the top rated comment reads:

"The BBC was more interested in telling us about the backlash against muslims after the murder of Lee Rigby than it was in the original crime..It's a disgrace & doesn't represent the views of most English people unless your name is Khan.."

For what it's worth, I think the accusation is unfounded. I listen to radio's 4 and 5 at each end of each day, and didn't hear what the commentator did. The anti-Muslim attacks were disingenuously puffed up, and those statistics were not duly challenged by the reporting. That tallies with the tone of Charles Moore's original piece. It's the suggestion that reporting of the Rigby murder itself was compromised which, to me, is the nonsense.

Look below the line on any newspaper website and ask yourself whether what you're reading is more or less 'extreme' than the piece above it. I found myself frustrated by the comments on this Guardian piece about the recent Swiss tax deal. The article obfuscated the facts (that not tax was collected because tax was due), but the comments were a shower of bile aimed at all the usual suspects. Guardian readers don't want informed and balanced reporting on the tax affairs of rich people.. they want to be told that those people are the antichrists. The Guardian tends to oblige.

Posted by The Thought Gang at 04:16 No comments:


"So often the left has been characterised as sentimental and good hearted, but unable to deal with the reality of economic necessity. Of course, this ‘economic necessity’ is a delusion."  (source)

Posted by The Thought Gang at 03:57 No comments:

Pat comments, over at Tim Worstall:


.. the Government is very much to blame for surrendering to the Left’s ghastly narrative at the first possible opportunity. Without a good political counterbalance this tax nonsense will continue to run further from common sense. One just hopes the general ineffectiveness of Government will prevent any real damage.

.. whilst Ben Saunders delivers a professional's analysis of the Fair Tax Mark:


Rather than making me want more tax disclosure, it makes me feel like we should have less. It appears that tax campaigners are unable to understand the tax disclosure notes already published. I have very little confidence in them understanding even more data.

Let's address Pat's notion that the government should be providing 'counterbalance' to the increasingly extreme reaches of the current 'tax justice' movement. That comment, I should point out, is in response to outrage about what a (full) tax-paying company has done with some of it's post-tax income.

The problem for the government, and for Pat, is that there is nothing at all to be gained for the politicians by criticising the fair tax movement. That war was lost as soon as the public mood was captured. We saw, with the banking crisis, that people want (maybe even need) a bogeyman. Ideally, a rich one. Corporations are perfect. They are largely faceless, and their alleged misdeeds will, inevitably, involve big numbers. Indeed, the bigger the better.. hence we hear a lot about the billions they generate in revenues, even though profits (pre or post tax shenanigans) may be small or non-existent.

If the politicians come out in support of the companies then they are siding with 'big business'. And so the debate ends. Nothing they say about jobs and investment and services will counter the simple 'I have to pay all my tax, so should they' retort. Cameron's 'we're all in this together' soundbite is, well, biting him on the arse. But even if he'd not said it, the situation would be the same.

The government has two options. They can cede to the campaigners and see what happens.. knowing that if the results are bad for the country it will be their fault, but if they are good then the credit will go to everyone but them. OR, they can say the right things to the camera, whilst (and this is regrettable) carry on, privately, doing what they believe is right. Richard Murphy will continue to shout that the actions are not in accordance with the words, but such is is politics there's no avoiding that. If, in the background, the government and the market can bring about a steady movement away from the more egregious end of the avoidance spectrum then the mainstream media will lose interest and no harm will be done.

So what about the 'Fair Tax' mark? Well, it's another example of what the politicians are up against. How do we think it plays if they criticise it? It's a devious corruption of a notionally good idea. Perhaps the government should have seen it coming and, with the fanfare they command, got there first with something a little more fit for purpose? But it's really not their place to provide a kite mark over and above compliance with the laws that they have made. Margaret Hodge can grandstand about fairness and morality from the safe position of someone with no power or remit to enact laws that would enforce it. Cameron and Osborne won't have that luxury until after the next election.

What we need for the Fair Tax mark is, insofar as is possible, is the silent treatment. We need no acknowledgement from government, and (perhaps more importantly) none from the companies that it targets. Even those who manage to score highly. The overton window has shifted far enough towards the worldview of a few statist extremists and political opportunists.

Richard Murphy believes that provision of full employment is a core requirement of the state. His list of things that the government shouldn't provide to the proletariat is limited, and he's still not keen on anyone making much profit thereon. So it's fair to conclude that he's, at best, ambivalent to the private sector as a whole. On that basis, I'd caution against *any* private enterprise engaging with any of his whims. Even if Amazon and Starbucks are your enemy, he is not your friend.

Posted by The Thought Gang at 09:07 No comments:

Thatcher is dead, so this bit of intefering bollocks from Millypants will probably have to be repeated and relaunched in a few weeks:

"Mr Miliband pledged to create "powers so that local people can decide, through their councils, what shops can and can't open up."

It's like the current system where 'local people can decide, with their feet, what shops will and won't open up'. But worse.
Posted by The Thought Gang at 05:11 No comments:

The Thought Gang
I don't know what I think. But it's probably not the same as you.